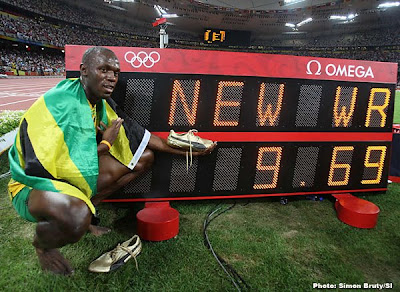 On Saturday Jamaica’s Usain “Lightning” Bolt ran the fastest 100 meter and 200 meter in 9.69 and 19.30 seconds respectively, making him the fastest man on Earth. He was so fast off the 100 meter block that he could slow down and look at the crowd some 20 meters before crossing the finishing and still break the world record. How much more faster can Bolt runs?

Like fellow world-class athlete Michael Phelps, Bolt’s daily fitness routine and diet is off the chain. After Bolt demolished the 100 meter world record he was quoted saying, “I woke around 11am and decided to watch some TV and had some nuggets.”

McDonald’s Chicken Nuggets? Thats a bit of stretch for me having watched Super Size Me where filmmaker Morgan Spurlock went on a 30 days only McDonald's food regime and supersize its meal if asked. Spurlock's grueling drive-through diet spirals him into a physical and emotional metamorphosis that will make you think twice about picking up another Big Mac. He actually gained alot of weight and the worst bit his health and life is at stake.

In his breakdown of his daily fitness and diet regiment Bolt admits maintaining his 6′4” 138 lb physique, without supplements, while still being able to enjoy the occasional Guinness and Red Bull. No matter how you cut it, Bolt certainly had marveled all of us and I expect him to continue to break more records no matter what goes into his diet. I m off to McDonalds to super size my nuggets hoping to break some records later.

McDonalds must've paid him to say that