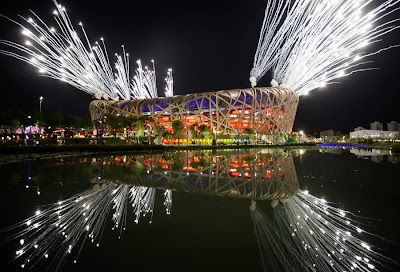 It was the best opening and closing that i had ever seen and it will surely be regarded as one of the best Olympic Games ever. Beijing's huge investment in the Olympics will help confirm its place as a world-class city and business center, and leave a legacy of improvements for the Chinese people.

Unlike most of the other previous hosts, where the Games led to a mountain of debt and many of the venues now sit unused, the $40 billion pricetag is a comfortable figure that the Chinese government can afford and a majority of the $40 billion was spent on infrastructure in and around Beijing — not only the sports facilities which Beijing and its many universities lacked, but subways, roads, mass transit systems, inter-city rail, and housing development. That is not wasted money for “image” but a real solid investment for the future. Less than a quarter of the total spend was on purpose-built venues such as the Bird's Nest and Water Cube. With an improved transport system, financial services infrastructure, communications network and hospitality industry, Beijing will be better positioned as a world-class city.

What are the new roles for the newly built Stadiums?

1. Bird's Nest - The new operators of the Bird's Nest, a consortium led by state investment group CITIC, plan to auction the naming rights and make it home to Beijing GuoAn Football Club with a complex of hotels, restaurants and shops built around it. Soon Bird's Nest may be renamed to Coca Cola or Adidas Stadium.

3. Wukesong Indoor Stadium - AEG Worldwide, a US sports and entertainment management firm hoping to tap into a post-Olympics boom, has already teamed up with the National Basketball Association's NBA China to secure the rights to manage the Wukesong indoor stadium, which staged the basketball competition.

4. National Indoor Stadium - This venue will be used for future sports competitions, arts, cultural and entertainment events and also serve as a fitness center for the people of Beijing.

5. Olympic village - The village will be converted to residential area with the apartments selling from $500,000 upwards apiece.

With the closing of the biggest event of all time, I m sure China has once and for all silent the many critics who had earlier raised many concerns. I dont think there will be any more doubts in their mind whether China has the ability to put on a good show or whether China is ready to take on the world.

The one thing that Beijing Olympic has successfully done for the Chinese people is that it certainly had pushed the people to be more confident and proud of themselves.
Posted by Alvin Foo at 6:38 AM