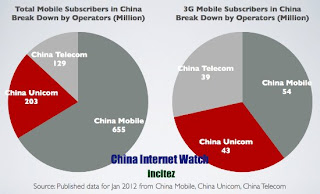 According to the released data from three telco operators in China, there are 987.58 million mobile subscribers in China by end January 2012. China Mobile is the largest mobile operator with over 655 million subscribers including 53.94 million 3G subscribers.
Posted by Alvin Foo at 8:30 AM 1 comment:

Netease released an info graphic in chinese on Netease mobile Internet in 20111. Below are some of the findings include:

- HTC, Samsung and Motorola are the top three brands for Android devices
- Guangdong province has the highest penetration rate in smartphone usage
- 9pm-11pm is the period with the highest mobile usage on both iOS and Android devices
- For news related applications, the highest usage is during 8am-9am
- On iOS devices, games (20%), entertainment (10%) and books (9%) are the top three most popular categories; while on Android, it’s tools (21%), games (21%) and entertainment (7%)
- on AppStore, the number of free apps download equals to that of paid apps; but there are twice the number of free apps downloaded on Android Market
- Games is the favorite category (33%) for Netease Apps on iOS but tools (22%) are the most popular on Android.
Posted by Alvin Foo at 7:11 AM No comments:

Google is in the midst of overhauling its Android Market into a more expansive online content marketplace with books, movies and apps--thereby putting it more in line with Apple's iTunes and App Store.

Google Play integrates the features of Android Market, Google Music and the Google eBookstore into a single, cloud-based ecosystem.
All previously purchased content will be available through Google Play by accessing a user's Google account. Your videos, books and music apps will also be upgraded to Google Play Movies, Google Play Books and Google Play Music apps.

Google Play also touts the ability to store up to 20,000 songs for free in the cloud, to then listen to via PC, desktop, tablet or mobile device. All content purchased through Google Play is cloud-based, allowing users access to music, movies, apps and e-books on-the-go.

While numerous studies have shown Android to be the dominant operating system among smartphone users, Google's Android Market app storefront has not experienced the same level of success. Last year, mobile analytics firm Distimo reported that revenues generated via Apple's App Store for iPhone exceed Google's Android Market by a 4-to-1 margin. I m certain Google Play will provide some competition to Apple.