Bringing the Hypermarket to your mobile phone

This is a really smart and intelligent e-commerce integration using the power of smartphones. At the click of a button, the QR code taken will automatically drop the product you are buying into the shopping cart ready to be purchased. Once you complete the purchase, the product will be on its way to your home. This would save many of us a lot of time and no longer need to make the long queue at the hypermarkets.
Check the video below :
Posted by Alvin Foo at 9:03 PM No comments:

Google Plus - Do we need another social network

Watch the video below and it tells why you need GooglePlus. If you dont have an invite, drop me a comment below.

Apple sold 20.34 million of iPhones in the past 3 months 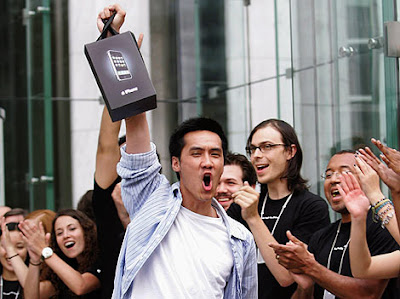 Another stunning quarter for Apple recording a massive increase in profits thanks to the dominance of Apple's iPhone. Sales for its fiscal 2011 third quarter, ended 25 June 2011, increased 82 percent year-on-year to US$28.57 billion and profit was up 125 percent to US$7.31 billion. Apple sold 20.34 million iPhones in the quarter, representing 142 percent unit growth over the year-ago quarter.

Sales of the iPhone mean that Apple will almost certainly have passed the formerly dominant Nokia and will be battling Samsung for the title of the world's largest smartphone vendor by volume. Gartner believes that Apple could overtake LG by the next quarter and become the third largest mobile phone vendor worldwide.
Its a phenomena growth to the top for Apple with just one device where as other manufacturers had to spend so much effort coming up with with various designs and models. Its a game-changer and iPhone had definitely turn the table for the industry and at the present moment its a huge catch up game for many and I dont reckon this is going to change for the short to mid-term. With iPhone 5's launch not too far away, its definitely going to be another record breaking year for Apple.
Posted by Alvin Foo at 8:04 AM 1 comment:

A new report by Canaccord Genuity has predicted that Google’s mobile ad revenue will reach US$14 billion by 2015 driven by smartphone uptake, growth of Android, and new services offered by Google.

This figure represents nearly half the US$29 billion Google generated from online ad sales last year and shows that the mobile platform is closing the gap on web based platforms.

This report is in line with the prediction that mobile will eventually draw level with online platforms before overtaking them due to changing consumer behaviour.

According to the report Google already brings in 2.5 billion from Mobile Ads with much of this coming from search and display ads that Google serves on Apple devices. But their dominance will only increase thanks to all the new products that they are releasing and as the consumer uptake for these services continues to grow.
Posted by Alvin Foo at 8:01 AM 2 comments: 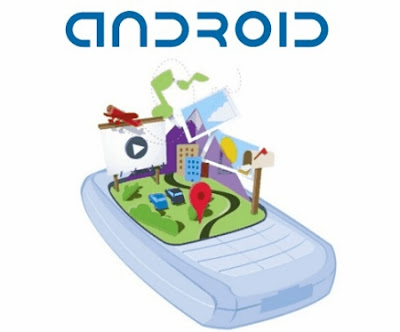 550k daily device activations, and more than 135 million having been sold so far according to Google. Google has announced its latest set of quarterly financials, revealing revenues of $9.03 billion for the second quarter of 2011, and net income of $2.51 billion.

So far, more than 135 million Android devices have been activated in total, catching up steadily with Apple's 200 million iOS devices. More than 400 different Android devices are now available, and Android Market has generated more than six billion app downloads, too.

The milestones came after Google introduced new features to its Android Market app, including editorial picks, e-books and video rentals.
Android is certainly on a rampage growth.
Posted by Alvin Foo at 9:06 AM No comments: 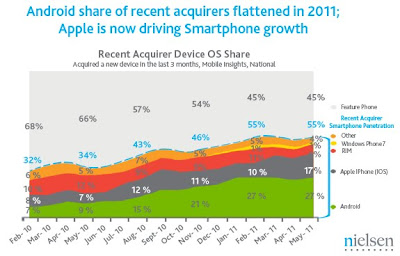 Although Google is now activating 500,000 new Android devices each day, research firm Nielsen reports that Android smartphone sales to U.S. subscribers have flattened over the last three months. Android phones made up 27 percent of U.S. smartphone purchases between Mar. 1 and May 31, Android also accounted for 27 percent of new smartphones during the Dec. 1, 2010 to Feb. 28, 2011 period.

Fifty-five percent of U.S. consumers who purchased a new mobile handset during the last three months opted for a smartphone over a feature phone, the first time smartphone sales set the pace in the American market, Nielsen reports. Just a year ago, smartphones made up 34 percent of U.S. handset purchases.
Smartphones now make up 38 percent of the addressable U.S. mobile market. Android remains the dominant platform, representing 38 percent of the overall U.S. smartphone market. iOS is next with 27 percent market share, followed byBlackBerry at 21 percent. Windows Phone 7 makes up 19 percent, and Microsoft's legacy Windows Mobile accounts for 9 percent.
Posted by Alvin Foo at 12:21 PM 1 comment: