Make calls to a regular phone from your Gmail account

Gmail users can soon make phone calls from within their accounts for free to the U.S. and Canada and for pretty cheap to several other countries. The service will be rolling out to Gmail users in the U.S. immediately, with international availability coming at an unspecified later date.
Posted by Alvin Foo at 7:53 AM No comments: 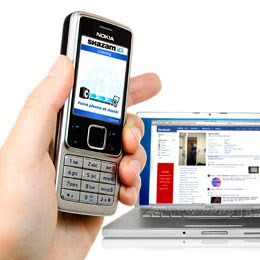 Facebook revealed that its iPhone app has 102.2 million monthly active users, with another 57.5 million using Facebook for BlackBerry, 11.9 million using its Android app, and 2.6 million using its Palm webOS app.
That's already 174.2 million monthly active users, and this figure doesn't include the 986,000 people still using Facebook for Sidekick, the 120,000 people on INQ handsets.
What's more, these figures don't include anyone using Facebook from their Nokia handset - it doesn't have a dedicated application page on Facebook like those listed above. Nor does it include any users accessing the social network through operator or handset UIs (Vodafone 360, Motoblur etc), or through Facebook's mobile website, which is big in the developing world.

In short, Facebook's active mobile user base is surely already over the 200 million mark, and probably well on the way towards 250 million.
Posted by Alvin Foo at 7:21 AM No comments: Apple took nearly half of the available profits in the $6 billion mobile phone market in Q2 despite generating only 3% of sales. Apple's Q2 share was more than double that of closest competitor Nokia, even though Nokia captured 34% of total sales.

The disparity is partly down to Apple's emphasis on profitability over sales, as well as the increasing importance of the smartphone market. Apple and RIM, both exclusive smartphone vendors, have gone from a combined 7% profit share to 65% in the last three years.

Samsung and Motorola took out a respective 1% and 2% share of the ebit pie in the quarter, after eight quarters of both running at a loss and LG sank to a loss after years of profit.
Guess the moral of the story is to focus on bottom line than top line. Great product with fantastic user experience is the real key which both Apple and RIM had certainly came out on top. Unfortunately as of now, there isnt a competitive device out there that can rival either Apple and RIM.
Posted by Alvin Foo at 7:07 AM No comments:

It is probably the cheapest tablet around and still puzzled how these guys could make money out of this pricing. Up until now, its still not in production so unsure whether they will price it out at $35. The cheapest faked ipad in China operating with an Android OS is priced around $

Bear in mind that the $35 price on this tablet, which we heard about a couple weeks back, is a fantasy until it is actually in production and releasing with that price. And also note that when the narrator is talking about how well it handles Android 1.6, the video is sped up quite a bit. I’ll believe it when I see it — but if I do see it, I’ll be pleasantly surprised.
Posted by Alvin Foo at 5:27 PM 1 comment: The first two advertisers on Apple's iAd network have said they are pleased with the results from their campaigns. Nissan tells the Los Angeles Times that people spent an average of 90 seconds using its iAd, ten times longer than comparable online ads and click-through rates were five times higher.
Meanwhile, Unilever's iAd for its Dove brand saw a "double-digit" percentage of users seeking further information about the product advertised, while 20% of viewers watched the ad more than once.
The caveat here is that these were the first two iAds, and iOS users were excited enough about them to want to watch and interact with them. They had an extreme novelty value. Even i had clicked on almost all of the ads just to check it out. I must admit the user experience is good but since the amount of ads arent that many, thus its still too early to judge.
The real proof of iAd's effectiveness will come a few months down the line but this is certainly a good start.
Posted by Alvin Foo at 7:39 AM No comments:

Android surpasses BlackBerry as top-selling smartphone OS in the US 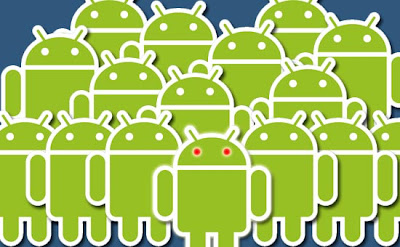 Google's Android platform now represents 17.2 percent of the global smartphone market, overtaking Apple's iOS as the world's third most popular smartphone OS and edging past Research In Motion's BlackBerry to emerge as the top-selling OS in the U.S. according to new data published by research firm Gartner.
Worldwide sales of Android-powered devices topped 10.6 million in the second quarter of 2010, up from just 756 million just a year ago, at which time Android made up only 1.8 percent of the global smartphone market.

Gartner reports that global smartphone sales totaled 61.6 million units in Q2, up 50.5 percent year-over-year. Symbian remains the leading smartphone OS worldwide, controlling 41.2 percent of the market (down from 51 percent a year ago), sales of Symbian devices topped 25.3 million in the second quarter, up from 20.9 million in Q2 2009.
BlackBerry unit sales exceeded 11.2 million (up from 7.8 million a year ago), with the platform representing 18.2 percent of the worldwide market, off from 19.0 percent. Sales of Apple's iPhone surpassed 8.7 million, with iOS now making up 14.2 percent of the market in Q2 2009, consumers purchased 5.3 million iPhones, translating to 13.0 percent market share.
Microsoft's Windows Mobile took the biggest hit: Sales slipped to 3.1 million from 3.8 million a year ago, corresponding with the platform's market share plummeting from 9.3 percent in the second quarter of 2009 to 5.0 percent in the most recent quarter.
For more on worldwide smartphone sales, check this release.
Posted by Alvin Foo at 7:12 AM No comments: 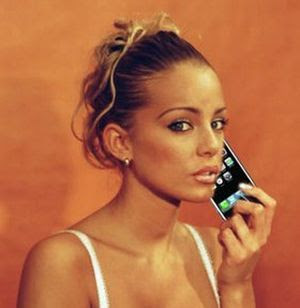 In news that is likely to please Apple fanboys, research conducted by a dating site has found that iPhone users have had more sexual partners than smartphone owners.
OKcupid.com found 30 year-old women who use an iPhone had slept with an average of 12.3 people, double the number of those with an Android device (6.1) and around three more than BlackBerry users (8.8).
Among men aged 30, Android users again fared worst, with an average of six sexual partners, compared to 8.1 for BlackBerry owners and ten for iPhone users.
The results will be good news for Apple, the dating site aimed exclusively at Apple lovers, which last month announced it had over 22,000 members.
Posted by Alvin Foo at 12:44 PM 1 comment: The latest edition of the most comprehensive guide to the European games and interactive industries, Sourcebook 2010, it is available via the dedicated Sourcebook website and a digital version of the print book that can be read online and downloaded on Issuu. Go check it out and download it free.
Posted by Alvin Foo at 8:04 AM No comments: 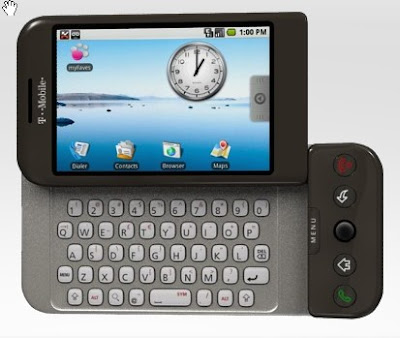 Smartphones now make up 25 percent of the U.S. mobile market, up from 23 percent in the first quarter of 2010, according to new data issued by The Nielsen Company. Nielsen expects smartphones to overtake feature phones in the U.S. by the end of 2011 reports that smartphones based on Google's Android operating system continue to gather steam surpassing Apple's iPhone to account for 27 percent of smartphone sales over the last six months, compared to 23 percent for the iPhone.

BlackBerry OS remains the U.S. market leader, representing 35 percent of smartphone subscribers nationwide, the iPhone is next at 28 percent, followed by Microsoft's Windows Mobile (15 percent, down from 27 percent a year ago) and Android (13 percent).
Posted by Alvin Foo at 8:01 AM 1 comment:

Jailbreaking of iPhone 4 straight from the browser 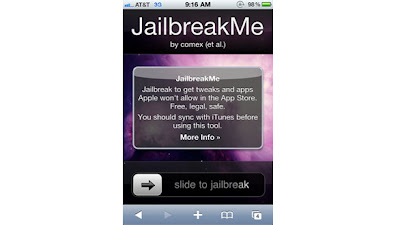 The first hack for the iPhone 4 has gone live and you can do it straight from the iphone browser. Users don’t even need access to a PC or Mac. This latest jailbreak can be applied simply by visiting www.jailbreakme.com on the iPhone’s browser and following the instructions.
The more straightforward nature of the hack compared to those for iPhone, 3G and 3G S will no doubt lead to concerns that it will fuel a piracy boom on the latest model. I m sure Apple is going to retaliate strongly on this one.

Please proceed with caution because this can and will brick your iPhone but most reports indicate smooth sailing. Make sure you back up your iPhone before attempting to jailbreak it just in case.

This is the recently released BlackBerry 6.0 promo video and it shows off some of the rather cool new features that the 6.0 OS will support, including a new browser, integrated search across the device, along with numerous user interface improvements.

Watch it and let me know what you think.
Posted by Alvin Foo at 7:05 AM 1 comment:

Developers can now book iAds to promote their own apps 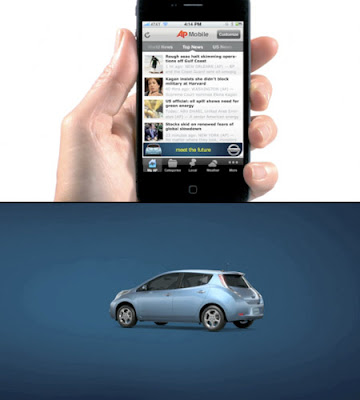 Apple has rolled out its iAd programme to developers, which means they can buy ads to promote their own content in other apps. Apple will be charging developers 25 cents per iAd click, which is a significant discounts from what it charges brand advertisers ($2 per click, 1 cent per impression).
The good thing about iAds is that user can download advertised apps from the App Store without leaving the app they're in. Once they are done looking at the advertisement, user will be taken back to the app. Its really an ad within an app!
The iAd Network allows developers to exclude ads from competitors or other unwanted advertisers based on specific keywords, URLs, and application Apple IDs. This will definitely open up more opportunities to many developers to market the new apps.
Posted by Alvin Foo at 7:36 AM No comments: 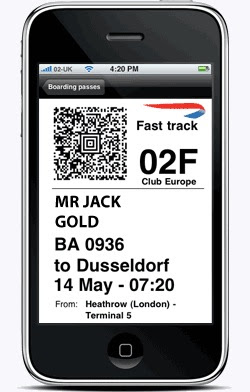 This is how it looks, pretty cool right, definitely much better looking at the flimsy paper boarding pass that you get at the check in counter.
The British Airways app lets you access your current and upcoming flight details, check-in and discover flight information, timetables and so on. Right now you can only use the mobile boarding pass between London Heathrow and Edinburgh. I m sure this will be gradually opened to other routes in due time.

It makes so much sense to have it on your mobile as its always with you and there is no need to ransack your bag or pocket anymore for that flimsy boarding pass. As a traveler myself, i Love it.
Posted by Alvin Foo at 7:54 AM No comments: