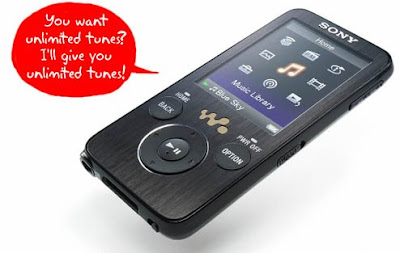 According to a report in the FT Sony Ericsson is planning to announce an unlimited music download service later this month. The service, which would rival the similar offering Comes With Music which was announced by Nokia recently, will be ready for a public launch by Christmas.

Sony Ericsson is in discussions with the large music labels about the service which would be a perfect added value product for it’s popular Walkman phones.Despite producing some of the higher quality music phones Sony Ericsson has seen a decline in market share recently and analysts feel they are now being pushed into the “all you can eat” music service by competitors.

There is no doubt that bundling unlimited music downloads will help sell mobile phones but Sony will have to pursuade networks such as EMI, Warner Music and Sony BMG (current partners in the pay as you download PlayNow Arena operated by Sony Ericsson) that unlimited downloads are a viable business model.

Nokia’s planned service includes DRM so if Sony Ericsson can offer unrestricted downloads they would gain an early advantage over their competition.

With all the hypes on unlimited music download, i m not sure whether both Sony Erisson and Nokia will see big money as there is little the service could do to immediately prop up their revenue. I m not even sure whether phone buyers will fork out the extra money to pay for the music download service especially they can rip it off from the internet and CD for free at the present moment. Lets see....
Posted by Alvin Foo at 7:42 AM