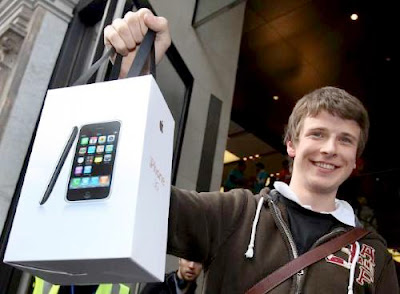 Ninety-eight percent of iPhone subscribers use at least one mobile data service according to market research firm The Nielsen Company's Q3 2008 U.S. iPhone Executive Overview.
70% of iPhone users listen to audio tracks on their device, with 39% downloading music directly to the handset, 66% of users download software and applications, and 35% screen video content, which Nielsen says makes them seven times as likely as the typical mobile subscriber. Of course, if 98% of iPhone users have embraced mobile data services, that means 2% of the iPhone subscriber population does nothing more than make voice calls on the device.

Nielsen reports 43% of iPhone users rack up a monthly bill in excess of $100, compared to 20% of the total mobile subscriber population, 13% of iPhone users look to their employers to pay their wireless bill, compared to 7% of all subscribers.
Among consumers who purchased a new handset between January and September, 11% considered an iPhone, and 21% of them made the leap to the Apple device. As of the third quarter, 89% of consumers who acquired an iPhone within the previous six months were highly satisfied with their purchase, compared to an industry average of 71 percent of new handset owners.

In all there are now 3.6 million mobile subscribers ages 13 and up actively using the iPhone, Nielsen notes. Adults ages 35 to 54 make up the majority of iPhone users at 34%, while Hispanic subscribers represent a larger portion of the iPhone audience (21%) than of the total U.S. subscriber audience (13%). In addition, 44% of iPhone subscribers report a household income in excess of $100,000, compared to 22% of the overall subscriber population.
Posted by Alvin Foo at 7:29 AM

As cell phone users who tend to rack up higher wireless bills, iPhone users arguably have a particular interest in cost cutting when it comes to their cell plans. There is one increasingly popular method for achieving cellular savings that worked great for me. Customers with plans by Verizon (like myself), AT&T, Sprint, T-Mobile, and US Cellular are seeing substantial savings achieved through a company called Validas.

The name of the Validas website, http://www.fixmycellbill.com, gives a good idea of what they do. Validas analyzes your online cell bill and calculates how much money you could be saving on your plan. In my case, Validas saved me over 19 bucks every month on my Verizon plan–or over 230 dollars per year. For me, that almost works out to getting a free month of my plan every year! Apparently the average Validas user saves over 21 percent on their cell bill. If you choose, for a nominal fee of $5, Validas will provide your personalized cell bill adjustment report that is emailed to your wireless provider in industry specific format so you can actually implement these cash saving changes. If Validas can save you more than $5 on your bill (the average customer saves over $500 annually through Validas), this obviously provides a very cost effective solution.

I was personally so impressed with the company’s operations and the cell savings Validas got for me that I jumped at the chance to work for Validas when the opportunity presented itself. It's a great company that is rapidly becoming considered an advocate for the wireless customer. Any cell subscriber who wants to cut costs should check out this service. It’s free to consult and you only stand to save.