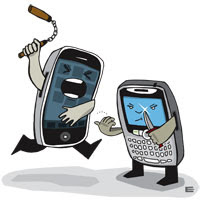 Apple's iPhone outsold rival RIM's BlackBerry in the latest quarter, according to a technology analysis firm, confirming to the recent boast by Steve Jobs. Jobs took a shot at RIM during a conference call announcing Apple beating RIM in their fiscal fourth-quarter results.

U.K.-based Canalys confirmed Jobs' claims on Thursday in a report on the global smartphone market. Apple shipped more than 6.8 million iPhones during the third quarter of 2008 to give it a market share of 17.3 per cent. RIM shipped just over six million BlackBerry phones in the quarter for a 15.2-per-cent share of a market that saw more than 39 million phones shipped overall.

Apple leapfrogged both RIM and Motorola from a year ago to take the number two spot, behind Nokia Corp. Nokia shipped more than 15.4 million smartphones in the quarter for a market share of 38.9 per cent, but saw its leadership position take a big dip from 51.4 per cent a year ago.

Apple's growth over the past year has been staggering. The company shipped only 1.1 million iPhones during the third quarter of 2007, giving it a growth rate of more than 500 per cent this year.

Touch screens are definitely proven to be the secret sauce for Apple considering the future mobile usage of applications such as playing music, maps and web browsing.

Canalys also looked at the operating systems running on smartphones. About 46.6 per cent of smartphones shipped during the quarter ran Nokia's Symbian, followed by Apple's own operating system at 17.3 per cent. RIM came in third with 15.2 per cent, followed by Microsoft Corp.'s Windows Mobile at 13.6 per cent and Linux open-source software at 5.1 per cent.
Posted by Alvin Foo at 7:09 AM