Android is on the charge when it comes to mobile internet and application usage, judging by AdMob’s just-released October Mobile Metrics Report.
Google’s OS took an 11% share of worldwide smartphone ad requests on AdMob’s network in October – up from 3% in April. In the US, it’s risen from 7% of requests to 20% in the same time period.
What’s more, Motorola’s Droid looks set to continue that growth. Just two weeks after its launch on 6th November, AdMob says it accounted for 24% of all its Android ad requests.
Globally, iPhone also increased its share of ad requests on AdMob’s network in the last six months, moving from 43% in April to 50% in October. The big loser was Symbian, which went from 36% to 25% in the same time period.
However, Research In Motion may have cause for concern. Its global market share of AdMob requests declined from 9% to 7% between April and October – but in its biggest market, the US, that share went from 17% to 12%.

Windows Mobile is also on the slide, with its global share shrinking from 5% in April to just 3% in October. Meanwhile, Palm’s webOS – represented in October by the recently-launched Palm Pre smartphone – took a 2% share that month. 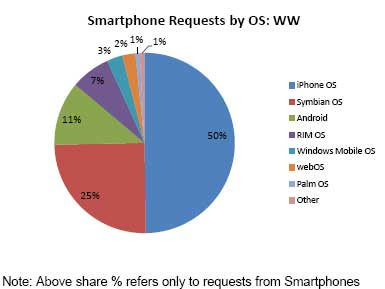 The full report can be downloaded from AdMob’s Mobile Metrics blog.
Posted by Alvin Foo at 7:49 AM