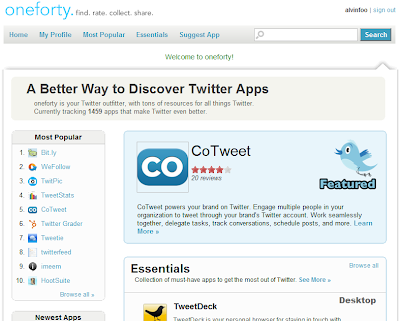 Twitter now has its very own app store, offering a directory of third-party services and apps based on the popular micro-blogging service.
It's the work of a startup called Oneforty. And included in the 1,300+ apps already tracked in the store are all the mobile Twitter apps for iPhone, Android, BlackBerry and other platforms. It's the first attempt to offer a central directory of apps that use Twitter's API, and ranks apps according to popularity and user ratings.
Oneforty is also tied closely into Twitter itself, getting users to sign in with their Twitter ID, and bringing up lists of tweets mentioning each product when browsing.
Mobile is a big part of the store, because Oneforty plans to make money from affiliate fees - for example when users click through to buy a paid Twitter app from iPhone's App Store. I just signed up and received my beta invite.
Posted by Alvin Foo at 8:10 AM