50 million iPhones and iPod Touch devices out there 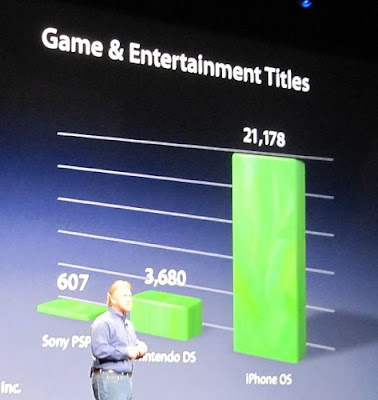 Something to worth pondering and how far Apple's devices are going to take on the gaming world. Steve Jobs appeared on stage at the Annual Apple event recently to say that the company has sold 30 million iPhones to date. Later in the same presentation, SVP of product marketing Philip Schiller confirmed that they have sold 20 million iPod Touches. That’s a total of 50 million devices that have access to the iTunes App Store, which has more than 75,000 applications. In all, users have downloaded 1.8 billion applications.
Schiller took the opportunity to knock the competition when it comes to gaming and entertainment titles on the iPhone OS compared to the Sony (NYSE: SNE) PSP and Nintendo DS. Schiller said the PSP has 607 titles, the Nintendo DS has 3,680 titles and the iPhone has an overwhelming 21,178 and that number isnt stopping anytime soon. Extremely amazing figures taking into consideration the devices had only started its mobile journey in 2007.
Posted by Alvin Foo at 7:54 AM