Samsung Mobile is No 1 in the US 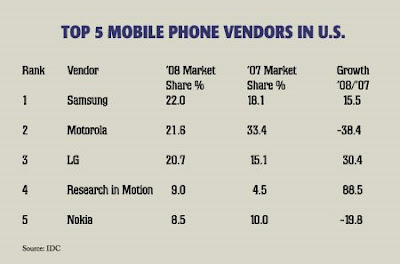 Samsung Electronics Co. Ltd. eked out a slim lead in market share over Motorola Inc. in the United States last year according to new numbers from IDC.

Where Samsung showed 15.5% year-on-year growth between 2007 and 2008, Motorola showed a 38% drop. LG Electronics Co. grew 30.4% in the same period and expected to claim at least No 2 position in the 2009. Motorola’s reversal of fortune was stark: In 2007, the American vendor claimed fully one-third of its home market, which has dwindled to well less than one-quarter. This year is going to be neck-to-neck race between the 2 Korean mobile companies and don't be surprise LG overtaking Samsung.

The US market is increasing its popularity on smartphones who now buy smartphones in greater quantities than their Western European counterparts with RIM showing 88.5% year-on-year growth between 2007 and 2008, and Apple grew 101%. Smartphone shipments in the U.S. shot up 68% in 2008 over the prior year, while smartphone growth in Western Europe reached 37% in the same period.
Samsung and Motorola, however, held down the bottom of the top-five smartphone vendor list, led by RIM (46% U.S. smartphone share), Apple (21%) and Palm (9%). Samsung had 6% and Motorola 5%. Where is Nokia??
Posted by Alvin Foo at 7:37 AM