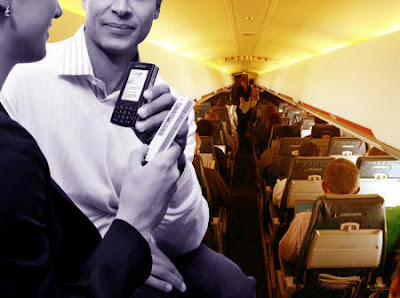 British Airways have confirmed they will be offering limited mobile communication services from Autumn this year, initially only aboard the London to New York JFK flight in business class.

Interestingly, BA will not be allowing you to actually make a phone call, instead users will rely on SMS, email and the Internet to keep in touch on the plane. This can only be seen as a good thing as no one wants their journey disturbed by the endless ringing of a phone, however, British Airways have said they would introduce voice calls if the demand was there.

Emirates became the first airline to offer in-flight mobile calls in March last year, charging a hefty £2 per minute! According to the Daily Telegraph, a survey conducted by the newspaper revealed 85% of their Travel section readers would not use an airline offering the service. As long as voice calls are not involved, Internet in the sky sounds good to us!
Posted by Alvin Foo at 7:22 AM