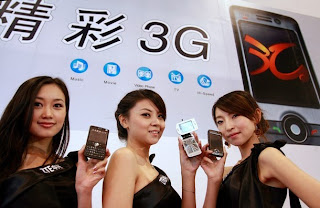 China's Ministry of Industry and Information Technology will issue China's first 3G license for China Mobile's TD-SCDMA today, marking China's formal entry into the 3G age. There is no mention when China Unicom and China Telecom will gain their coveted 3G licenses for their WCDMA and CDMA2000 businesses but i reckon it should be anytime soon as they are both ready to offer the service.
Latest updates :

AP News reports that China today confirmed the official allocation of 3G licenses to the country's three state-owned mobile operators. As expected, market-leader China Mobile - the world's largest mobile operator - has been granted a license to deploy commercial nationwide services based on China's homegrown 3G technology, TD-SCDMA, whilst China Unicom and China Telecom will launch 3G services based on global standards WCDMA and CDMA2000 1xEV-DO, respectively.
This will surely going to trigger investment levels of about US$41 billion over the next two years. No timeline for service launch has been announced.

Chen Jianqiao from China's Ministry of Industry and Information Technology stated that the country expects 500 million people to sign-up for 3G services in the next five years. China currently has over 600 million mobile users. This estimate could make the Chinese 3G market five times the size of Europe's. Pretty staggering figures!!
Posted by Alvin Foo at 1:41 PM