Vodafone getting social with new 360 brand 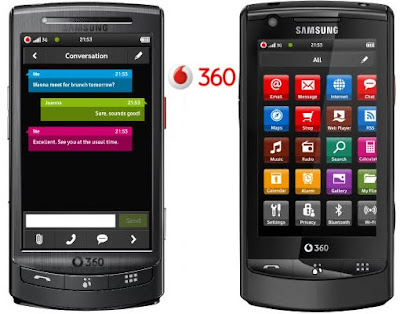 Vodafone is aiming to refashion its mobile web business around the address book and social networking with the launch of its Vodafone 360 brand.

Samsung has built two dedicated Vodafone 360 handsets, using the Linux-based LiMo, with a “proximity algorithm” that will highlight the most frequently-contacted people. It will be launched in eight European markets by the end of the year, with launches in India, Turkey, South Africa, and other markets next year.

At launch four Nokia Symbian smartphones will come pre-loaded with Vodafone 360, and part or all of the service will be downloadable to more than 100 handset models. It automatically synchs all contacts from a customer’s phone, Facebook, Windows Live Messenger and Google Talk, and will soon also include Twitter, Hyves and studiVZ. It also synchs wirelessly between the phone and the PC or Mac.
Posted by Alvin Foo at 7:21 AM