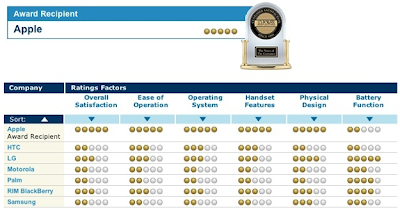 Based on a set of criteria, Apple scored highest over LG and Blackberry in the business category and highest in the consumer smartphone category, over second-place RIM.

LG ranked highest in satisfaction in the feature phone market.

Consumer smartphone users ranked Wi-Fi, touchscreen, and GPS as the most important features in a smartphone and 40 percent of the 1,148 respondents claimed to have replaced their landlines with cell phones. About half download entertainment software while 46 percent have downloaded travel apps like weather and maps.

You can read more about the study here.
Posted by Alvin Foo at 7:44 AM