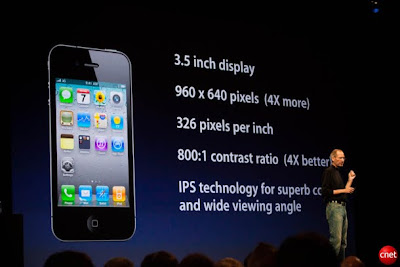 The big reveal at Apple's WWDC keynote this morning was, of course, the next-generation iPhone. The device will be called iPhone 4, and goes on sale this month in US, UK, France, Germany and Japan.
The 16GB model will cost $199 with a contract in the US, while the 32GB model will cost $299. It goes on sale on 24th June and will be available in 88 countries by the end of September.

Its launch in those five initial markets will be preceded by the release of the iPhone OS 4 software, which has been rebranded to iOS 4 to reflect the fact that it's also available for iPad and iPod touch devices.
Jobs focused on nine specific features of the new device during the keynote, starting with its design, which integrates the antenna into the structure of the phone itself.

The handset has a front-facing camera, which can be used for video calls via Apple's new FaceTime technology. It's Wi-Fi only, and will be made available as an open standard, which could see other handset makers using it in their own devices.
iPhone 4 uses the same in-house A4 chip as the iPad, and has a bigger battery, which Jobs said will lead to 40% more battery life for talktime: ten hours of Wi-Fi browsing, ten hours of video, and 40 hours of music.
The device will also have a gyroscope to complement its accelerometer and compass, which Jobs flagged as a boon to games developers, who'll now be able to use six-axis motion sensing in their games.
iPhone 4 will also have a five-megapixel camera, and will record HD video at 720p resolution.
Apple dishes out the stats in its WWDC keynote

App Store has now passed the five billion downloads milestone and the company has paid developers more than $1 billion for sales of paid apps on the store!
Jobs also confirmed that there are now more than 8,500 native iPad apps available in the App Store, which have so far totalled more than 35 million downloads. That's 17 apps for each of the two million iPads that have been sold.
Meanwhile, the iBooks application for iPad has so far generated more than five million e-book downloads and the five biggest publishers on iBooks is already accounting for 22% of their e-book sales.
Jobs also revealed that Apple now has more than 150 million registered iTunes accounts complete with credit card details and that this month, it will sell its 100 millionth device running the iPhone OS!

Apple announced today that its iAd mobile ads network will launch on 1st July, and already has $60 million spend committed by brands for the second half of this year!
CEO Steve Jobs listed the brands who have already signed up in the eight weeks since iAd was announced and they include Nissan, Citi, Unilever, AT&T, Chanel, GE, Liberty Mutual, State Farm Insurance, Geico, Campbell's Soup, Sears, JCPenney, Target, Best Buy, DirecTV, TBS and Disney.
Jobs had further claimed that iAd is on course to account for 48% of the US mobile display advertising market in the second half of this year, basing that claim on figures from JP Morgan suggesting the market will be worth $250 million for 2010 as a whole.
What iAd offers advertisers is guaranteed reach across a wide audience. That’s why big brand advertisers are signing up. So far, Apple hasn’t demonstrated that iAd will have the sort of personalized “long tail” targeting that made Google’s AdWords and AdSense a multi-billion-dollar busines

"We're trying to combine the emotion of video with the interactivity of the web. This is what advertisers have been after in the digital advertising medium," said Jobs.
I can finally decide on what phone to buy!!
Check below for the demo video.
Source : Apple
Posted by Alvin Foo at 8:20 AM