Nokia is sinking and Apple is flying 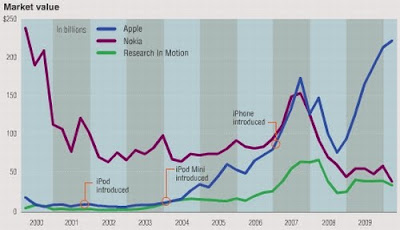 Bloomberg presented a chart that shows the erosion of Nokia’s market cap over the last 10 years. Not only that, it also shows how Apple has seemingly switched places with the Finnish phone maker.

10 years ago (back when the phone was bulky, the screens were grey, ringtones were sounding crappy, and I was still using a Motorola V), Nokia’s market cap was somewhere around a $245 billion which is where Apple is now. Both companies had actually traded place though not planned for.

In those days, phones were simple and there werent any differentiating factor except for the design. Most phones could send texts and make calls and nobody was really giving a damn on Wap or whether your phone could handle mms. But its all different now, a phone is more than just making calls or sending simple messages, today its all about the user experience, the size of the screen and its ability to bring the web to you. It’s cool to think about how much it’s changed right.

Just not too long ago, everybody was still talking about Nokia, the n95, the e66 and n96, these days, its either the iPhone, Blackberry or the Android based phones. Nokia is going through a difficult transition and its either they will make it to the other end like how IBM had transitioned or heading south similar to Motorola who was once the dominant mobile player.
Posted by Alvin Foo at 7:24 AM