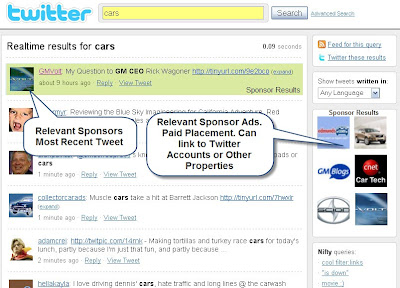 Microblogging site Twitter yesterday unveiled its long-awaited advertising program in a first step to turn the incredibly popular service into a profitable business. The ‘Promoted Tweets’ offering lets brands pay to have their tweets listed as the first result when a user conducts a search on Twitter.
Over time, Twitter plans to show the promoted tweets in the stream of messages people see when they log into the site and to allow partners from small developers to large Internet companies to display the sponsored messages as well. A handful of brands are already on board, including Starbucks, Virgin America and Best Buy, although Twitter is not yet charging for the Promoted Tweets service. The pricing model remains to be determined.

Despite being one of the most popular Internet services, Twitter has “frustrated some Twitter watchers” by its “stubborn insistence on a slow and thoughtful approach to monetisation.” In a blog posting this week, the company set standards for its new Promoted Tweets offering: “Promoted Tweets must meet a higher bar; they must resonate with users. That means if users don’t interact with a Promoted Tweet to allow us to know that the Promoted Tweet is resonating with them, such as replying to it, favouriting it, or Retweeting it, the Promoted Tweet will disappear.”
It’s worth noting that Twitter already draws some revenue from licensing partnerships with Google, Microsoft and Yahoo. Under the terms of those deals, tweets appear in each company’s respective Internet search results.
Posted by Alvin Foo at 8:10 AM