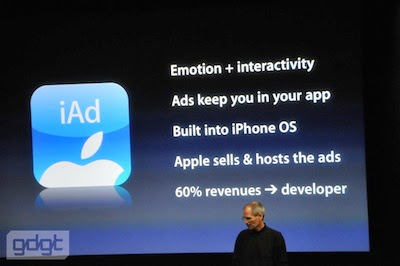 Apple yesterday unveiled the latest version of its iPhone operating system software which incorporates its high-profile move into the mobile advertising space. Apple stated that iPhone OS 4 features multitasking for third-party apps (allowing users to switch between several programs running simultaneously); folders to better organise and access apps; improved mail with a unified inbox, fast inbox switching and threaded messages; enhanced enterprise support with better data protection, mobile device management, and wireless app distribution; and iBooks, Apple’s new ebook reader and online bookstore recently debuted on the iPad.
However, aside from the inclusion of multitasking (a service Apple has been slow to introduce compared to rival smartphone offerings), it is the launch of Apple’s new iAd mobile advertising platform that has generated the most interest.

iAd is the result of Apple’s US$275 million acquisition of Quattro Wireless, a company that makes tools for embedding adverts in applications in January. iAd is designed to work so that users clicking on mobile ads do not need to leave their app and view the advertiser’s webpage via a Web browser. Instead, iAd claims to display full-screen video and interactive ad content without users having to leave the app. Apple claims that iPhone OS 4 lets developers easily embed iAd “opportunities” within their apps, and developers will receive 60 percent of iAd revenue. This puts Apple in the position of gatekeeper for advertising on the iPhone.
Apple has not given a specific launch date for the new iPhone software, stating only that it will be available “this summer.” A beta version of the software has already been released to iPhone Developer Program members.
Meanwhile, Apple also yesterday revealed a number of newsworthy statistics: it talked up the continuing success of its App Store - stating that more than 4 billion apps have now been downloaded worldwide, from an offering of over 185,000 different applications and revealed stronger than expected sales of 450,000 for the iPad tablet computer since its much-hyped debut last weekend. Since going on sale on 3 April, users have downloaded 600,000 digital books and 3.5 million applications for the iPad with Apple has so far sold more than a whopping 50 million iPhones!
Posted by Alvin Foo at 7:33 AM

Well...it's a great article. Thanks for sharing.