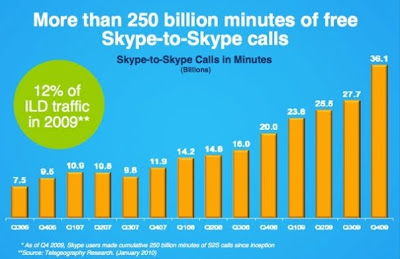 Skype accounts for 12% of all international calling minutes! Some amazing numbers below from a company that has started not too long ago if you compare them to incumbent carriers who had been in business for decades:
Skype can only grow bigger as the adoption proliferates. In fact, i had just conducted my interviews with some candidates on skype and the average call quality over the cloud is even much better than a regular mobile to mobile call. Its amazing how the technology has improved over the years. I can still remember making my 1st call over the internet using an arcane VOIP software back in the mid 90s where the call quality is nothing by comparison.
Posted by Alvin Foo at 7:56 AM