Online Advertising in China is on a growth rampage 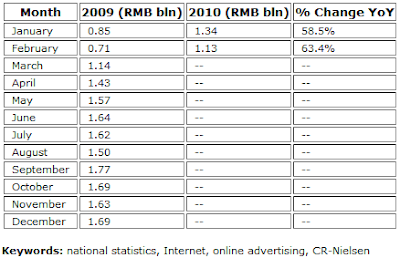 Apparel overtook automobiles to become the top online advertising industry while automobiles and retail ranked second and third, with spending dropping in the latter two by 44.5% and 28.4% from January, respectively. Among the top ten online advertising industries, spending fell across the board with the exception of fashion, finance and fast-moving consumer goods (FMCG), which respectively grew by 9.6%, 6.8% and 8.7% from January.

This is going to be an exciting year for online advertising as its expected that more money will be pouring into online as the total subscribers both online and mobile is at all time high and still growing month after month.
Posted by Alvin Foo at 7:28 AM