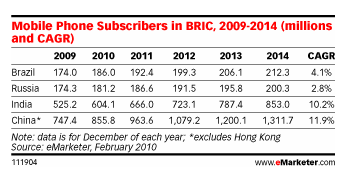 eMarketer has published its latest report on mobile trends in the so-called BRIC countries - Brazil, Russia, India and China. The figures are mind boggling. The report claims that by 2014, there will be more than 200 million mobile subscribers in both Brazil and Russia, 853 million subscribers in India, and 1.3 billion subscribers in China, of whom 957 million will be mobile Internet users.
"Staggering as it may be to conceptualize, there will be more mobile Internet users in China in 2010 than the entire population of the US," writes report author Noah Elkin.
The report predicts that while these Chinese users won't pay as much for mobile content, they could be a big base for the mobile industry to make money from ads. In fact, Elkin predicts that China will generate $223.2 million of mobile advertising spending this year, rising to $699.9 million in 2012.
Source : eMarketer
Posted by Alvin Foo at 7:19 AM

China has a very big population so no wonder they'll be on the top if the list of mobile internet users will be published.

Hi its really very nice i enjoyed a lot to visit..Handset prices

YUNG RO is trying to capitalize off of his asian fanbase. While promoting his current single Fresha Den A Mall the young CEO of BPENT is campaigning for a international appeal. China recovering economy and proven commerce is the key to YUNG RO's success.