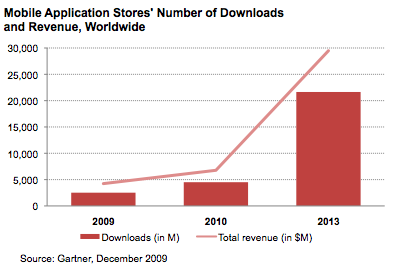 According to a new report from Gartner, worldwide revenue from mobile applications will total $6.8 billion in 2010, an increase of 60% over the $4.2 billion spent in 2009. Growth in revenue from mobile apps can be expected to continue at a rapid rate, as more consumers purchase smartphones and more apps become available. Gartner predicts that in 2013, 21.6 billion apps will be downloaded, generating nearly $30 billion in revenue more than a fourfold increase over 2010.

Gartner forecasts that 82% of all downloads will be free in 2010, and that the share of free apps will increase to 87% by 2013. This leaves mobile advertising to make up for the loss in share for paid apps. Gartner claims that in 2010, 0.9% ($0.6 billion) of mobile app revenue will be generated by advertising.

My take is the marketplace for mobile will mature over the next three years, with increasing consolidations and company buyouts. Indeed, it’s already begun with Google’s purchase of AdMob and Apple’s purchase of Quattro Wireless and i m quite certain that more consolidations will take place this year.
Posted by Alvin Foo at 7:39 AM

Yeah!! Thats true!!
The mobile apps sale will definitely increase in the coming years,... Thanks for the nice article