Android accounts for more than a quarter of U.S. smartphone ad requests 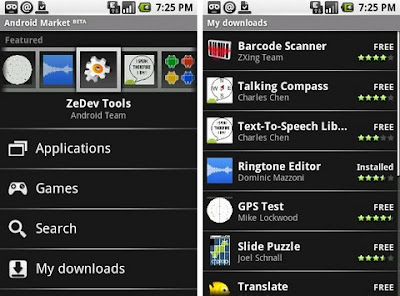 Google's Android operating system generated 27 percent of mobile ad requests from U.S. smartphones in Q4, according to mobile advertising network AdMob's Mobile Metrics Report for December 2009. While Apple's iPhone accounted for 54 percent of U.S. smartphone requests in the previous quarter, AdMob notes that Android's market share grew throughout 2009, and its U.S. share is by far its highest penetration in any global region. Among device manufacturers, Apple is the U.S. leader with 40 percent of requests, followed by Samsung at 17 percent and Motorola at 11 percent. 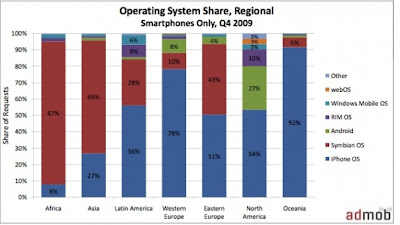 AdMob reports that Apple's iPhone OS is also the leader in the Western Europe, Latin America and Australia markets, with its success coming at the expense of rival Nokia, whose share of requests across the AdMob network declined from 33 percent in Q4 2008 to 18 percent in Q4 2009. The iPhone and iPod touch generated more than half of total Western European requests in Q4, while Android generated 8 percent, second only to North America in terms of penetration. Nokia's Symbian platform still dominates across the rest of the globe, however: In Asia, Nokia smartphones generated 53 percent of mobile ad requests in Q4, with the iPhone at 27 percent--Nokia also leads in Africa, yielding more than 50 percent of requests throughout the year.

Despite smartphones representing just 14 percent of mobile devices shipped in 2009, they generated 39 percent of worldwide traffic on the AdMob network/

For more on AdMob's latest Mobile Metrics Report, you can check out the release here.
Posted by Alvin Foo at 7:45 AM