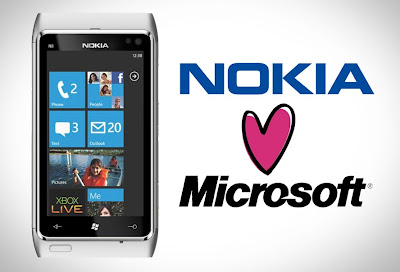 Nokia running Windows 7 will surely be happening. The rumours that have been bubbling throughout the week have just been confirmed by Nokia, as the company unveiled its strategic direction under new CEO Stephen Elop.

The key details: Nokia will adopt Windows Phone as its principal smartphone strategy, innovating on top of the platform in areas such as imaging, where Nokia is a market leader.

Symbian isn't being killed off instead, it will become 'a franchise platform', as Nokia looks to 'retain and transition' the existing base of 200 million Symbian users, while selling 150 million more Symbian devices around the world.

Nokia will also work with Microsoft on joint marketing, a shared development roadmap, and will aim to 'help bring Windows Phone to a larger range of price points, market segments and geographies'.

Microsoft's Bing will be used for search across Nokia's devices, as will the Microsoft adCenter for search advertising. Nokia's maps service will be 'integrated' with Bing and adCenter to create a 'local search and advertising experience'.

While the news to partner someone is a fantastic one for Nokia having been living in denial for years without coming out with innovative device to compete with iPhone and Android, the problem here is that Microsoft is a wrong partner of choice.

I m not saying that Windows 7 is a lousy platform, the platform is certainly nice and interesing but lack developers. Despite all the advertising that Windows 7 has been doing, it simply hasnt done enough to convince mass adoption. In the eyes of the current buyers of smartphone, the defunct user experience has to be an iPhone or Android.

If Nokia is going to partner with a third party OS, why just work with Microsoft, they should had just worked with any viable OS. This would had been a much better strategy as it would have allowed them to have scale, have multiple market entry points and essentially leverage their core DNA ie, their ability to make good hardware and use their logistics to push it into the market.

What would Nokia do in 12 - 18 months when they discover that the partnership isnt working out? By then, its almost game over for Nokia. While i m not hoping and wishing for their demise, the current strategy seems heading that path.
Posted by Alvin Foo at 9:58 AM