Nokia is still No.1 with RIM and Apple charging 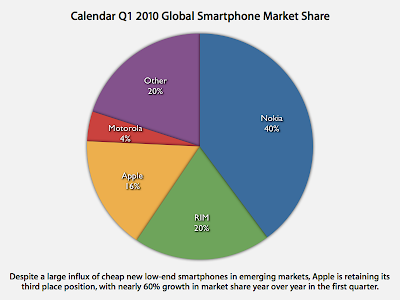 Global sales of smartphones surged by 50%, growing from 35.9 million units in the year ago quarter to 54 million units in the first quarter of 2010, the strongest growth rate in several years according to a report by Strategy Analytics.
Smartphones now accounts for 18% of all mobile phone sales. Nokia is struggling to retain its leadership position by focusing on emerging markets. The company sold a record 21.5 million smartphones in the first quarter, but it largely sold cheaper models "in regions including China and South America, while North America remained a problem market for the company.

Behind Nokia, RIM sold 10.6 million BlackBerries, keeping Apple in third place globally with its record 8.8 million iPhone sales for the quarter. Apple's growth in the first quarter made it the number one mobile vendor among all US phone makers. Globally, Apple reached a record high of 3% global market share among all mobile phone makers. RIM's second-place share, at 19.7%, remained relatively static, falling slightly from its 20.3% of the smartphone market in the year ago quarter.
Posted by Alvin Foo at 7:07 AM

I was really wondering whether Nokia would be able to survive ethe competition but good to know that it is doing well.The technology is superior in many ways indeed though I am also a lover of Iphones.