Apple is the No. 1 Tech company by market cap 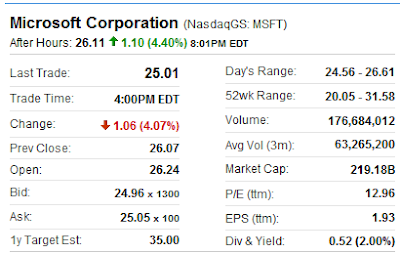 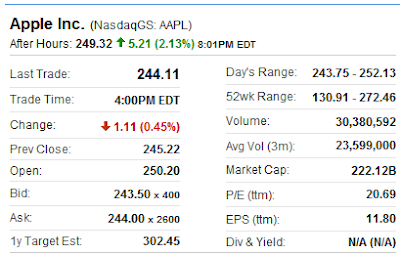 The moment came today when Apple, the maker of iPods, iPhones and iPads, shot past Microsoft, the computer software giant, to become the world’s most valuable technology company. This changing of the guard caps one of the most stunning turnarounds in business history for Apple, which had been given up for dead only a decade earlier, and its co-founder and visionary chief executive, Steven P. Jobs.
As of Wednesday, Wall Street valued Apple at $222.12 billion and Microsoft at $219.18 billion. The only American company valued higher is Exxon Mobil, with a market capitalization of $278.64 billion.
A little more than a decade ago, Apple, which had pushed out Mr. Jobs in 1985, was widely believed to be on the path to extinction.

Michael S. Dell, the founder and chief executive of Dell computer, went so far as to suggest that Apple should shut down and return any money to shareholders. (The computer maker is now worth about a tenth of Apple.) Around the same time, Microsoft’s chief technology officer called Apple “already dead.”

But with the return of Mr. Jobs to Apple in 1996 — and an investment by Microsoft of $150 million — the company began a slow path to recovery. Apple’s rebirth began in earnest with the introduction of the iPod music players, and Mr. Jobs began to gain a reputation for anticipating what consumers want. Congrats Apple...
Posted by Alvin Foo at 7:29 AM