Internet Overtakes Newspapers as News Source for the 1st time 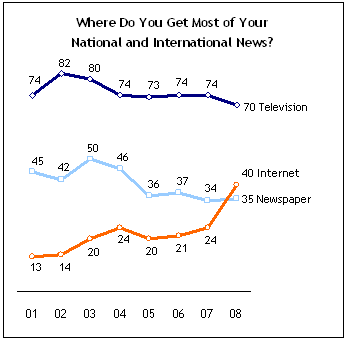 For young people, however, the internet now rivals television as a main source of national and international news. Nearly six-in-ten Americans younger than 30 (59%) say they get most of their national and international news online; an identical percentage cites television. In September 2007, twice as many young people said they relied mostly on television for news than mentioned the internet (68% vs. 34%).

The percentage of people younger than 30 citing television as a main news source has declined from 68% in September 2007 to 59% currently. This mirrors a trend seen earlier this year in campaign news consumption.
As mobile devices become data-enabled, more and more people will be accessing news from their mobile terminals and soon we will reach a point where almost all news are consumed online. Its really not too far away from where we are now. I have for a long time not made any purchases on newspapers and its only a matter of time where i will soon get quality live streaming of mainstream news on my mobile.
Posted by Alvin Foo at 8:39 AM