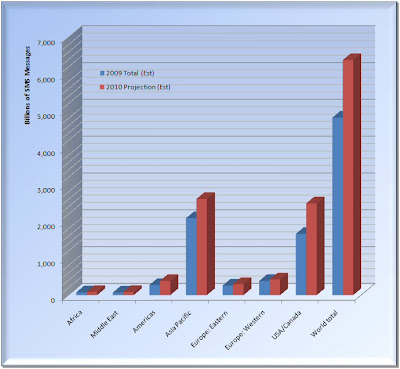 5 Trillion ! That's how many text messages sent in 2010 creating a $150 billion market according to Portio Research. The research firm expects the number of texts will double by 2014 and the market to grow to be worth $233 billion.
Multimedia messaging (MMS) market was worth $27 billion in 2009, making it almost as big as SMS five years ago. MMS is growing fast in all major regions around the world as affordable camera-equipped handsets flood the market and increasingly become the norm.

Portio expects rapid growth in the IM market, with almost 1 billion regular IMs and $18 billion in sales by 2014. Spending on mobile email will also triple over the next five years.
Posted by Alvin Foo at 7:48 AM