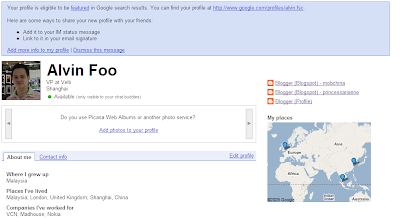 Google had just posted a new feature which enable users to search and find profiles of anybody on Google provided if that person had his google profile set up properly (see above - a profile of me). Google recently upgraded their profile features but the company is now investing heavily in making profiles a more integrated part of search.

It’s a subtle change but one that could make a massive difference. Right now Facebook has a dominant position when it comes to people search. That position is so dominant that they actually rival Google when it comes to searching for people. Facebook provides additional value over Google by finding people based on how close you are to them in the social graph among a number of other factors.

The new initiative will turn Google into a more effective profile aggregator. By doing so, the company could theoretically continue their pursuit of “out opening” Facebook despite the social network’s continued ability to attract almost a million users a day. While it’s still too early to determine how this will impact the battle to be the leader of the social web, Google is making it clear that they aren’t holding back, willing to use even their most coveted real-estate to fight the battle: Google search results.
Posted by Alvin Foo at 7:46 AM