Smartphones outsold PCs for the first time in 2011 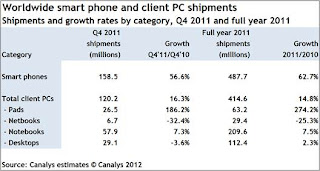 Vendors globally shipped 158.8 million smartphones in the fourth quarter of last year, and 487.7 million for the full year according to a recent report by Canalys. That compares to 120.2 million client PCs shipped during the quarter and 414.6 million for the whole year.


That category includes tablets, netbooks, desktops and laptops. The biggest of the four by far was laptops, which accounted for more than half of the annual total; tablets made up 15%. Smartphone shipments increased last year by 63% over the 299.7 million shipped in 2010. The global client PC market grew by just 15% year-to-year.

In all, 2011 saw a decline in demand for netbooks, slowing demand for laptops and desktops and a rise in tablets, Canalys said. In the space of a few years, smartphones have grown from being a niche product segment at the high-end of the mobile phone market to become a truly mass market proposition. The popularity had grown due to the lower priced smartphones, while interest is up in browsing and the use of apps and services on mobile devices.

Apple was the leading smartphone and client PC vendor in the fourth quarter, shipping 37 million iPhones, 15.4 million iPads and 5.2 million Macs. Apple's smartphone shipments in the quarter beat Nokia's previous single-quarter record of 28.3 million. That record was set in the fourth quarter of 2010. In all of 2011, Apple shipped 93.1 million iPhones, a 96% increase over 2010, making it the leading smartpone vendor over Nokia for the first time.

RIM finished fourth overall in smartphones globally for the year, with 51.4 million shipments, representing 5% growth in 2011.
Posted by Alvin Foo at 12:25 PM

Hi dear. This is a happy thing. I like abercrombie

Hi dear. This is a happy thing.