Google is dominating the US Mobile Advertising Space 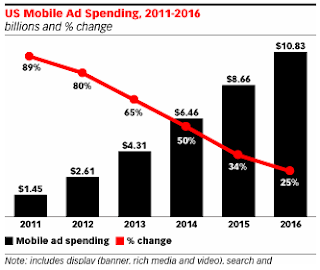 Mobile advertising spending in the U.S. reached $1.45 billion in 2011, an 89 percent increase over 2010 spending of $769.6 million, according to a new eMarketer report. The research firm anticipates nationwide mobile ad spending will grow another 80 percent in 2012, eclipsing $2.6 billion on its way to topping the $8.2 billion mark in 2016.

eMarketer anticipates that U.S. mobile search advertising more than doubled in 2011 as spending rose to $652.5 million, up from $253.2 million the previous year. The firm expects advertisers will spend $1.28 billion on mobile search ads in the current year.

Thanks a lot for posting such an informative blog article. Google is surely ruling the mobile markets. Even the Internet Computers Market is being ruled by Google.