Nokia still clinging on the overall No.1 market lead but not for long 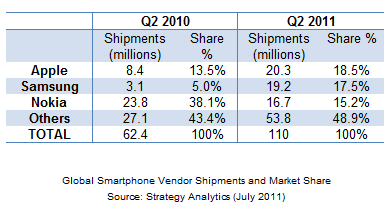 Strategy Analytics had confirmed Nokia’s dramatic collapse in smartphone market share, with the Finnish vendor falling behind both Apple and Samsung in shipments in Q2. According to the firm, total global smartphone shipments grew by 76 percent year-on-year to reach a record 110 million units in the quarter.
However, Nokia’s smartphone shipments fell from a market-leading 23.8 million a year ago to just 16.7 million. Apple took the top spot on 20.3 million, followed by Samsung on 19.2 million.
Total handset shipments incl. smartphones reached 361 million units in Q2 2011, rising 13 percent from 320 million units a year earlier. Nokia hung on to its overall device lead by shipping 88.5 million handsets worldwide, but saw its market share drop sharply to 25 percent (from 35 percent), its lowest level since 1999.
Samsung was second on 74 million units, followed by LG on 24.8 million. Apple’s 20.3 million iPhone sales cemented its position in fourth place. Though with only 6% market share, Apple made more profits than all the handset manufacturers combined. Gone were the days where the larger you ship, the more money you make. Such was unthinkable 4 years ago before the rise of iPhone and totally impossible to see anybody unseat Nokia who had such a commanding market share. As the saying goes, whatever that goes up must come down. Its hard to reach the top and its even more harder to continue staying at the top. I wonder who will be able to take on the commanding position Apple is in now..... maybe Google?? What do you think??
Posted by Alvin Foo at 8:40 AM