Apple will be introducing lower-priced iPhone 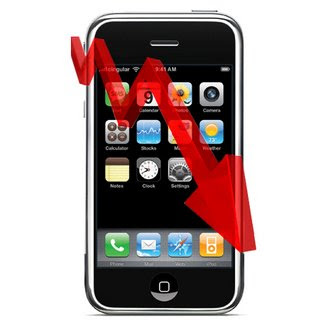 Apple will announce a cheaper edition of the iPhone very soon. Citing sources familiar with the initiative, Financial Times reports Apple will introduce an iPhone priced at either $99 or $149, down from the current low end of $199.
Operator partner AT&T will continue to subsidize the smartphone when subscribers sign a two-year service contract. "It's either a $50 or a $100 cut," said Morgan Stanley analyst Kathryn Huberty, citing a firm consumer survey indicating that a $50 reduction could increase iPhone demand by 50 percent and a $100 cut could increase demand by 100 percent.

Financial Times notes the lower-priced iPhone will likely begin production in July and boast the iPhone 3.0 operating system update, also expected to be released next week at WWDC 2009. This is going to put alot of sales pressures on the newly launched Palm Pre and the other mobile phone manufacturers. Look at how much damage one company with one device could do to the global mobile phone market.
Posted by Alvin Foo at 1:37 PM