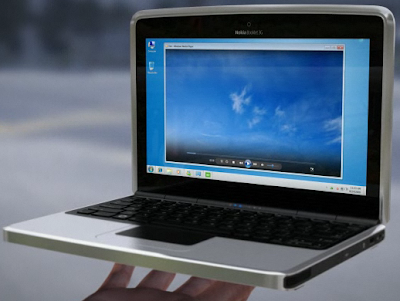 Nokia has unveiled the Booklet 3G, its long-rumoured netbook. It has a ten-inch display, and is powered by Intel's Atom processor. Its Windows-based device packing an Intel Atom processor, HSPA and Wi-Fi connectivity, and Ovi integration.

It promises 12 hours of battery life, 3G/HSPA data connectivity built in (plus Wi-Fi and Bluetooth), and access to the Ovi suite of services. That includes the Nokia Music Store, and the Ovi Suite synching tool. The netbook also has an HDMI port for HD video out, a front-facing camera that will support video calls, and A-GPS - which will be used for an Ovi Maps widget for location-based services. It'll weigh in at 1.25kg, and probably be running the trouble prone Vista.
It’s difficult for me to get excited about the Booklet 3G as not only is it late to the party, but it doesn’t appear to offer much more than the netbooks already on the market. I expect Nokia will try to use its Ovi services to help differentiate the Booklet 3G. But Ovi is available from any current computer right over the web, so there’s no “netbook specific” feature there. Can't see how Nokia is positioning itself in this crowded netbook market.